“Kripalu” is one of the Hindu words for “compassion.”

My weekend at North America’s largest and oldest yoga and retreat center – Kripalu – was filled with just that. Compassion. And of course rules… always with the rules. It was pointed out to me by my dear ol’ dad (numerous times in my teens in fact) that I am either breaking existing rules or causing the institution of new ones. He was right. I was. Have been. Still am. It’s part of the charm of being me.

So this past weekend there were some of those silly guidelines for bouncing between. Like the safeties in bowling alley gutters. I ricocheted down the path. It wasn’t too narrow. After all, the majority of this retreat center’s rules I already abide by as a full grown woman, roar.

Ok, so say you see this 100 year old yoga teacher walking past you in the cafeteria while you’re eating dinner. What would you do? Say hi right? I mean, this is a once in a lifetime I believe. Although I read recently that scientists believe the first person to live to 125 is alive right now. Please, let it be Ruth Bader Ginsburg.

Anyway, I asked Ms. Tao Porchon-Lynch if I could get a photo with her. Duh! She responded to my hardcore fan-girling pretty well. I noted in our initial meeting how many kind gestures this light-hearted, wine expert wearing stilettos in the Kripalu cafeteria, made toward me. She gave me her full 100 year old attention, wrapped both her arms around me for the photo, and then told me I was pretty! So of course I broke the “no smartphone-camera thing except in the wireless room and any room with a phone symbol over it” rule. The luggage room bore that symbol, so later I did some of my smartphone wizardry stuff  in there to try and even out my rule karma.

And, well… I may have broken this same rule again. I mean once it’s broken; it’s not like it’s another rule. It’s the same one. But I just know you are going to thank me for it. Because I just may have taken a photo of their…. house dressing ingredient list! Now if we can combine them all in the right quantities, we will have the recipe for deliciously dressing all our dressable foods. Thank me later. Here it is: 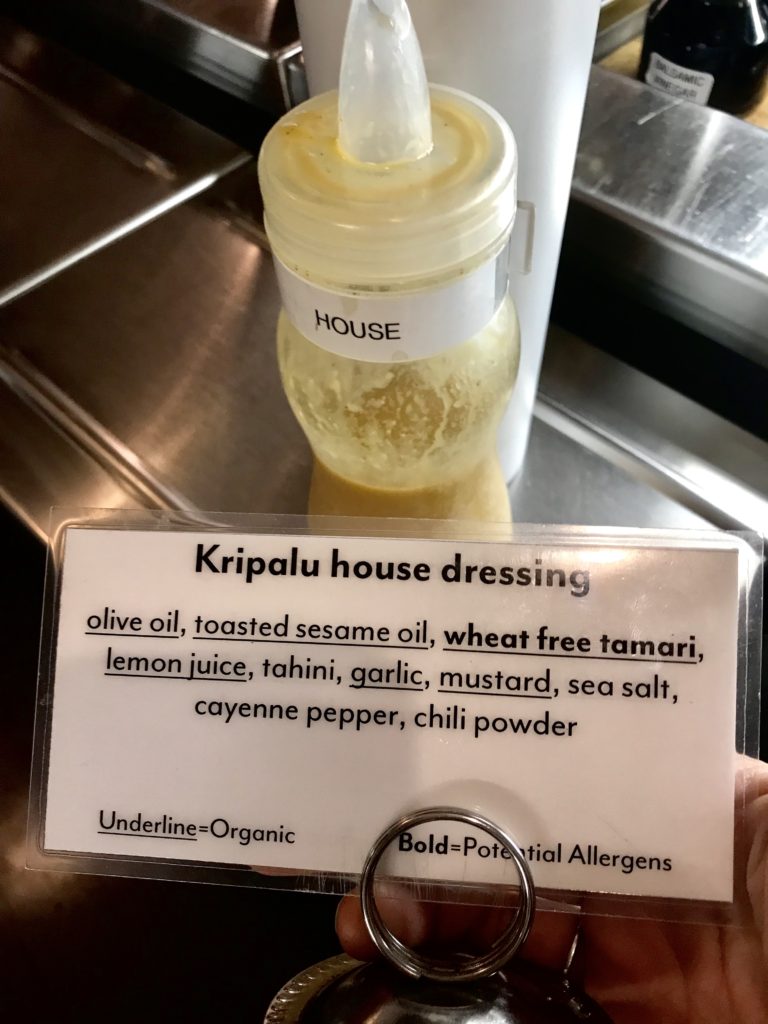 So that one may even be two rules (copying recipes?) Who knows. But not only is this dressing divine, the food at this place is absolutely scrumptious. Each breakfast, lunch and dinner is served buffet style in a two story tall dining hall on the 2nd of the four floors. Every meal includes steamy, creamy, dreamy soups; crisp, fresh veggies; savory grains; and mouthwatering seasonal dishes. And that’s just the main buffet line! There’s also the Buddha Bar, offering a variety of Ayurvedic-influenced choices, and the Sandwich Bar, where you can design your own panini with organic lunch meat or vegetarian ingredients.

Oh, and breakfast is eaten in total silence!  And this, my friends made my “list of rules I followed” list. Kinda feels like I should get double credit for it too. I mean, my grade school teachers would vouch, remaining speechless is a doozy for this girl. I was silent for 3 whole breakfasts! Not a peep. And phoneless (more or less). I read everything on the table the first day. Day two my teaching notes kept me occupied. But by day three, I nailed it. Not distracted. Total silence. Nothing but that soy sausage with that freaking insanely good Organic Raisin Sauce on their fresh baked bread and me. I mean, I was going to take a photo of the recipe for the Raisin Sauce, but turns out it’s just ground up raisins and water. No wonder it’s so yummy. I was basically eating wine on toast. Speaking of wine. There’s another rule I didn’t break. No alcohol. That one isn’t tough for me, but I still want a “rule follower” award for it.

If you’re into high-quality, all-natural ingredients with an array of nutritionally sound choices at every meal, Kripalu’s meals will not disappoint. Whole grains, fresh vegetables, and legumes form the backbone of their menus, with fresh poultry, fish, eggs and dairy products as optional protein sources. Then after you’ve scarfed some tasty healthy food – I mean after you’ve mindfully dined – they have this cool horizontal conveyor belt thing where you just drop off your dishes, and poof, just like you’re a teenager, they’re whisked away somewhere you can’t see, to be washed while you continue on your enlightened path.

In between and after your particular retreat’s programs you can attend other happenings at Kripalu. One night I wandered into an independent docudrama a gentleman named Albert Dabah had made and was sharing with the others in his “Jumpstart Your Memoir” workshop. It was called Extra Innings, and if it makes its way to a film festival near you, see it. He does a fine job depicting a story about a Jewish kid who just wants to play baseball. (It’s a short film.)

I also took several yoga classes and went for a hike. I meant to go on the organized hike, but it worked out best that I didn’t make the list, since I might have just broken more rules on it anyway. I did venture off on my own though. I read a sign that said not to, but I had the right shoes, and I mean it is just walking. Plus I stayed close. I just had to stroll the paths of their Chartres labyrinth. One of my most proud leave behinds on this planet other than my kids is the labyrinth my kids and I built in Southern Illinois in 2011.  Miraculously we selected a spot smack dab on the U.S. Art Line – a line of walkable, interactive, outdoor artworks stretching across the heart of America on the 39th latitude!?! Well, Kripalu’s was covered in snow. But I did get some photos of the grounds on this hike. I’ll share them below.

I will definitely be back at Kripalu and recommend the spot for anyone wishing some true respite and healing. Everything there is geared toward it. Just try to follow the rules. There aren’t many. But if you break a couple, well, I won’t tell.

The Gift of Presence