Ogayay in Pig Latin, the word yoga has Indo-European roots.  Many yogis learn that the word yoga is translated from the Sanskrit word yuj or yug, which means “to yoke.” But did you know it has its root word in common with other words like: jugular, conjugal and zygote?  These are all derived from yug as well.

So yug means “to yoke.” And then Yug became jugum (yoke) in Latin, and, because the collarbone is shaped like a small yoke, people started referring to it as the jugulum. So there ya go, we can now ask students to !

Eventually the term jugulum came to denote an area near the collarbone — the throat. So when 16th-century doctors needed a name for the large vein that runs through the throat, they went for the jugular. 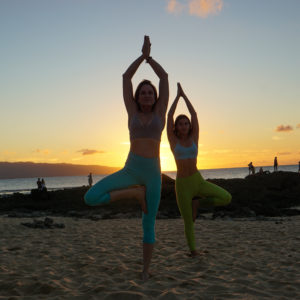 Another Latin derivative of jugum — conjugalis — came to mean “yoked” or “joined together.” And if you don’t think conjugalis is the root of our English word conjugal, meaning “related to marriage,” the yoke’s on you.

Yug also inspired the word zygon, the Greek word for “yoke.” From zygon, English derived zygote, a cell formed by the joining of two gametes.

How about that? Even the word yoga means more to me every day. If you’d like to yoke and broaden across your jugulums with a community of humans at a former Girl Scout Camp in the Shawnee National Forest near St. Louis, check out Manifest Station: Music & Yoga Festival May 3-5. It’s a family and pet friendly, all inclusive yoga retreat that includes over 30 movement & yoga classes, live entertainment nightly, and five plant-based meals starting at $108 per person.

Neophiliac Yoga Gotta Get that Funk

The Gift of Presence